Literature / The Word and the Void 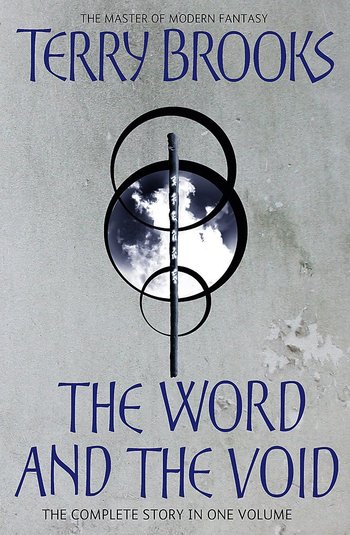 A trilogy of urban fantasy novels by noted author Terry Brooks, that deals with several recurring characters caught up in the ongoing war between The Word, which created all life, and The Void, which seeks to destroy it.
Advertisement:

The Knights of the Word walk the earth performing missions for The Lady, and each night they dream of what will happen if they fail. They are locked in a secret conflict with the demons of the void, once-human shape shifters dedicated to the destruction of all things.

The books are as follows:

In Running with the Demon, Cute Witch Nest Freemark finds her life thrown into chaos when the titular demon arrives in her hometown of Hopewell, pursued by Knight of the Word, John Ross. Both want something from her, though Nest isn't sure what that could be, and seem to have ties to her family's past, specifically her mother, who committed suicide some years earlier. The demon also goes out of his way to stir up trouble around the town, which is in the middle of a long and bitter strike, putting in motion numerous plans which, if successful, will lead to Nest's subversion, and the end of the world as they know it. A Magical Native American named O'olish Amaneh is also in the area, and provides Nest and Ross with some important, if cryptic guidance as the story moves towards a violent climax.

Several years later, in A Knight of the Word, John Ross, following a personal tragedy, has renounced his position as a Knight, and is now working for a mundane charity. Concerned that the demons will attempt to turn him, O'olish Amaneh recruits Nest to do for John what John did for her, charging her with saving the fallen Knight before it is too late. Unbeknownst to John though, one of the demons is already closing in.

After another Time Skip, both John and the demons return to Hopewell in Angel Fire East, hunting a fairy of enormous potential.

The books were retconned into the backstory of Brooks' ongoing Shannara series (see The Genesis of Shannara for details). One of the author's few ventures outside the world of High Fantasy, The Word and the Void paints a disturbing image of a world caught up in an ongoing war that it isn't even aware of.

The character sheet for this series, and the Shannara books can be found here

Alternative Title(s): Running With The Demon, A Knight Of The Word, Angel Fire East