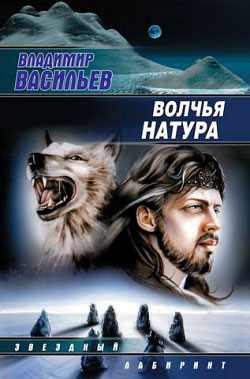 Wolfish Nature (Волчья натура, Volchya natura) is a science fiction duology (Divided for Publication) by the Russian science-fiction author Vladimir Vasilyev, consisting of novels Wolfish Nature and The Beast in Each of Us. The setting of the duology is a little unusual in that it postulates what would happen if humans had evolved from dogs instead of apes. One of the key things in this 'verse is that dog-humans would focus on bio-engineering instead of technology. In 18th-century, the dogs went through the Bio-Correction, eliminating the "wolf gene" from their gene pool. Now, humans aren't able to kill without extensive training and psychological damage. As such, there were no wars since the Correction with coups becoming increasingly rare to the point that the last one happened 200 years ago. Instead, the various countries have evolved the spy game to an art form. The author has chosen to keep the geographical and political names the same to avoid confusing the readers. The names of dog-humans are also pretty standard (for humans not dogs) and geographically consistent. The geo-political situation is slightly different from ours. For example, Siberia and Alaska are sovereign nations, although still friendly with their parent countries. The Baltic countries have merged into Baltica. United Europe is in full effect. US is not a superpower (there were no wars to make that happen), while Canada is split into two nations. The Middle-Eastern Confederacy is run by Turan (the joining of Turkey and Iran). Japan and China have also merged into one nation. Racism doesn't really exist as we understand it. However, the dog-humans readily identify each other based on their "morphemes" (i.e. breeds). There's a bit of Fridge Logic here, as many of these breeds are the result of human intervention in Real Life, although the novels imply that they are the result of genetic engineering during the feudal days. Technology is slowly starting to replace existing bio-tech "selectoids", although most are wary of "dead" things, even though "dead" computers are much more effective than their bio-engineered analogs.

The plot is kicked off when a European ecologist stumbles on an isolated enclave of wolves (humans whose ancestors have somehow escaped the Bio-Correction) near the Siberian town of Alzamay. The ecologist is quickly eliminated by the wolves, and they proceed to start a killing spree throughout Europe and Asia, eliminating anyone the ecologist might have contacted. Unfortunately for them, this results in the world quickly becoming aware of their existence, as murder is extremely rare in the world. Alzamay quickly becomes the most important town in the world, as agents from all over the world find themselves trying to outsmart their counterparts and contact the wolves first. After all, each country wishes to study the wolf gene and, possibly, start breeding warriors again. A non-government organization called Cheers whose goal appears to be the same for the purposes of world domination also sends their people to Alzamay. The wolves themselves appear to be Not of This Earth thanks to a large number of UFOs spotted in the area and the improbability of their remaining to isolated for centuries.