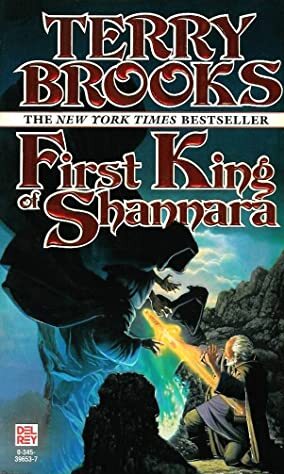 First King of Shannara is a prequel to Terry Brooks' bestselling Shannara series. It deals with the Second War of the Races, telling the story of the rebel Druid Brona's second attempt at conquering the Four Lands, and how he was opposed by Bremen, and Jerle Shannara. A single volume, it provides much of the Back Story for The Sword of Shannara and its sequels, while introducing us to Bremen, Jerle, and many other posthumous characters previously known only from Allanon's narrations.

When the book begins, the outcast Druid, Bremen, returns to the Druid's Keep at Paranor, attempting to warn them that Brona is back, has transformed into the Warlock Lord, and is bent on conquering the world. He is accused of plotting to take control of the Druids, and laughed out of the Keep. Taking his allies Risca, and Tay Treffynwyd with him, and later joined by apprentice Druid Mareth, Bremen leaves, intent on stopping the Warlock Lord through some other means. Shortly afterwards, Brona raids Paranor and has it wiped out to the last Druid.

Bremen and his allies split up. Tay Treffynwyd journeys to the Westland, with instructions to warn the Elven King, and find the Black Elfstone before Brona can. Finding the entire Elven royal family slaughtered, he teams with the last survivor, his old friend Jerle, and sets off to find the stone. Risca, sets out on his own to warn the Dwarves, and provide them with what help he can.

Bremen, of course, has the most difficult and iconic task of all. With the help of a master blacksmith he must forge a weapon capable of defeating Brona for good. This weapon will be wielded by the Elven King, Jerle, and will give hope and strength to all of the Races. It will be, of course, The Sword of Shannara...

Tropes found in this book include: