You Can't Thwart Stage One 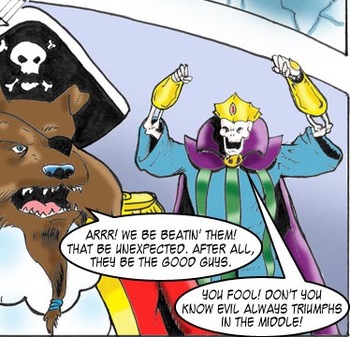 "We lost, and you weren't there. But that's what we do, right? Our best work after the fact? What are— the A-vengers? We're the A-vengers, not the Pre-vengers, right?"
— Tony Stark, Avengers: Endgame
Advertisement:

Any time the Big Bad is putting together an Evil Plan, you can always expect it to reach its final stage, no matter what the hero or heroes do to try to stop it. If the villain is trying to collect the Three Cosmic Keystones that will allow them to become a Physical God, they will assemble them all. If the villain is trying to unseal a Sealed Evil in a Can, it will break free and need to be defeated or re-sealed. If the villain is planning to disgrace the king, hypnotize the princess and rule the kingdom, they will accomplish the first two before The Hero stops them. And so on.

No matter what the hero tries, the forces of villainy will inevitably come within inches of victory, forcing one final showdown with everything at stake. This does not mean The Hero must be completely ineffective until this last battle — Lieutenants may be defeated and minor complications may be done away with, but these will be temporary setbacks. As for the brunt of the threat, there's no averting it until the eleventh hour. Naturally, once the eleventh hour arrives, The Good Guys Always Win, but they'll be cutting it close. The closer, the better.

This is especially painful to watch when The Hero or otherwise a good guy will attempt to foil the Evil Plan in a way that In-Universe seems like a perfectly good idea, but from a Doylist point of view is too anticlimactic to work. In the best case, they fail at the earliest opportunity in a relatively harmless way. Otherwise, they may appear to be making progress — obstacles will be cleared and the stakes will rise — only for the story to inevitably Yank the Dog's Chain and pull the whole thing into catastrophic failure.

This is what happens when Finagle's Law meets the Rule of Drama. You Are Too Late is often involved. Hostage for MacGuffin, MacGuffin Delivery Service, and Xanatos Gambit are frequently employed to make the hero effective without routing the villain. Team Rocket Wins can give the heroes more of a challenge and justify failing at first.

Compare Your Princess Is in Another Castle! and Unspoken Plan Guarantee (the unspoken plan is stage two). Contrasts Pyrrhic Victory and Broke Your Arm Punching Out Cthulhu.

Has nothing to do with being unable to beat Stage 1.

Due to the nature of this trope, all examples are likely to be spoilers.