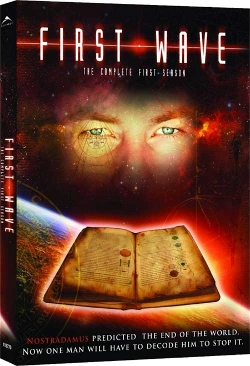 In 1564, Nostradamus predicted the destruction of Earth in three terrifying waves. The first wave is here.

My name is Cade Foster. These are my journals. They killed my wife, framed me for murder. Now I run, but I don't hide. With the prophecies of Nostradamus as my guide, I seek them. I hunt them. I will stop the first wave.
— Cade Foster, Opening Narration
Advertisement:

First Wave (1998-2001) was an early Sci-Fi Channel original series. The show starred Sebastian Spence as Cade Foster, a man trying to expose an alien conspiracy to conquer the earth. After the aliens destroy his life and frame him for his wife's murder, he discovers a book of prophecies by Nostradamus that names him as the "Twice-Blessed Man" who is destined to save the world.

Cade teams up with a conspiracy theorist and skilled hacker, Crazy Eddie (Rob LaBelle), to expose the invasion over the Internet. He later meets a sympathetic alien, Joshua (Roger Cross). Jordan Radcliffe (Traci Elizabeth Lords), a rich woman with her own private militia who vowed to destroy the invaders after they killed her family, joins the cast for the third and final season.

Season 1 finally got an official DVD release in 2011.