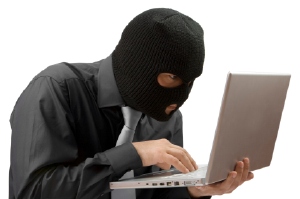 The dark counterpart to the Playful Hacker, the cracker is a computer criminal. He may never leave his dark, monitor-lit room, but he can destroy lives and impoverish millions with his miraculous but misused skills, because Everything Is Online. With his Magical Computer, the cracker can break into the CIA, spy on anyone, cause train wrecks and airplane crashes, bankrupt entire nations, and most dramatically, practically wipe a person off the face of the earth by zeroing all his identity and credit records (because, of course, birth certificates in Hollywood are always null and void). He delights in mayhem and never objects to lining his pockets with money untraceably transferred from someone else's bank account.

Crackers are often called "hackers", but this is more a product of outsider confusion and sensationalist media than reality. Those within the subculture often insist that the term "Hacker" is a value-neutral term that means "people who are skilled at making computers do things outside their original specifications".note The term cracking refers explicitly to the criminal/malicious subset of hacking. A "crack" often refers to a patch for a program that bypasses some lockout intended to keep users away, such as DRM.

Because authorities never know any better, and because the cracker is so good at hiding his trail, they often chase the innocent Playful Hacker who was in the wrong place at the wrong time. But in the end, the cracker will come to a bad end, either murdered by his employers/partners or electrocuted by his equipment.

In security informatics, the real-life analogue of this character is sometimes called a "Black Hat". This is derived from old western movies based on the colour of villains' hats, which people basically made up from whole cloth decades later. There, the opposite term is "white hat". There's also the "grey hat", which doesn't entirely fit into either camp.

In certain circumstances, the Cracker might be a Mad Scientist, since their abuse on computer technologies and security loopholes qualify for the Mad Science, which a typical scientist wouldn't do.

Not to be confused with the crime show starring Robbie Coltrane, or the derogatory term used for white trash,note However, crackers stereotypically tend to be holed up in their room, so both senses of "cracker" might apply. The ambiguity might therefore be deliberate. or cowboys of central Florida, or those things with the gunpowder in you pull at Christmas, or those biscuit-like things people eat with regular butter. And cheese.