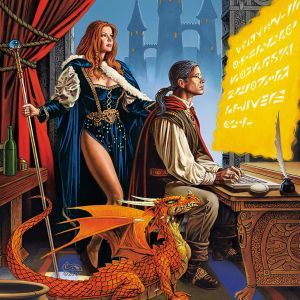 A fantasy series by Rick Cook, featuring Willian Irving Zumwalt, "Wiz", a genius programmer who gets pulled into a world where magic works (called simply "World" by locals) to help defeat the southern order of magicians. There he discovers that magic spells and demons can be used like computer programs and single-handedly wins the war. Almost.
Advertisement:

In the second book The Fair Folk express concern about the power his new magic gave humans. As in "start discussing pre-emptive extermination". And northern wizards have to hire more Earth programmers to create better weapons and at the same time to make them feel less threatening.

In the third book the magic compiler research notes fall into hands of some hacker criminals from Earth, who manage to strike a deal with Eldritch Abominations. Elves demand wizards to deal with the problem, but do help a bit.

In the fourth book Wiz works as a consultant solving a dragon problem of a faraway town, dealing with arrogant dragons, corrupt medieval politicians and a clueless FBI agent.

In the fifth book the programmers deal with consequences of some early uninformed architectural decisions, while the new operating system gets its first viruses. Some other loose ends from previous books get tied up.

In the sixths book things get real complicated. The magic compiler was open-sourced on the web to boost its development, but one cocaine addict found that its magic does work on Earth, if the user is sufficiently high. He stole some dragon's eggs, dragons took human children hostage, forcing wizards to frantically search Earth for eggs before they die and to make sure the source gets closed for good.

The first two books have been combined in Wiz Biz omnibus, which was for years available online in Baen Free Library, but disappeared when the site got reorganized a few years after Jim Baen's death. There was also a two-in-one omnibus for books 3 and 4: Wiz Biz II: Cursed and Consulted.