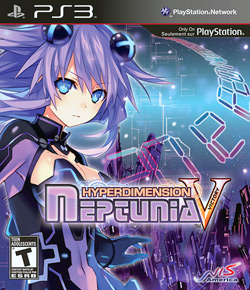 Is your retro console as moe as this?
Advertisement:

Hyperdimension Neptunia Victory (Kami Jigen Game Neptune V) is the third game in the Neptunia series, JRPGs featuring moe anthropomorphisms of the gaming industry in a humorous take on the Console Wars, as well as the first sequel in the series, due to the previous game being a Continuity Reboot.

Taking place sometime (Histoire at one point mentions "years" having passed since the battle against the Deity of Sin) after the second game, Neptune is kicking back and enjoying the peace from Arfoire's defeat when she finds herself sucked into a portal and awakens in an alternate dimension. This world is a version of Gamindustri set in a time similar to the 1980's, under siege by a group of enemies known as the Seven Sages. Teaming up with this world's CPUs, Neptune must figure out a way to get home and defeat these new enemies.

The game got released in Japan in August 2012, while other territories got it in March of 2013.