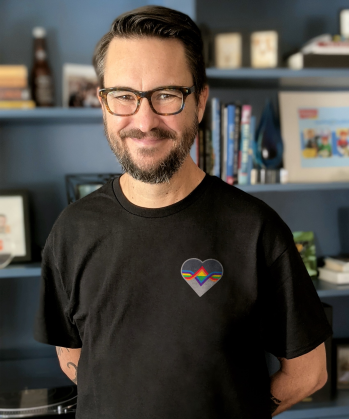 "I thought it was brilliant satire, not only of Trek, but of fandom in general. The only thing I wish they had done was cast me in it, and have me play a freaky fanboy who keeps screaming at the actor who played 'the kid' about how awful it was that there was a kid on the spaceship. Alas."
—Wil Wheaton's review

and actor best known for Star Trek: The Next Generation and Table Top on Geek & Sundry's YouTube channel.

Born in Burbank, California, he became a full-time actor at the age of 8, scoring small roles and a large voice-acting credit for the classic The Secret of NIMH. Then in 1986, he was cast as the lead in the Rob Reiner movie based on Stephen King's novella The Body, called Stand by Me. This got him plenty of public exposure, enough for him to land the job that he's most known for:

Wesley Crusher of Star Trek: The Next Generation.

Imagine that you're playing a character that you know is hated by the fandom that you're a part of. Imagine reading the hate mail it gives you, despite the great feelings you have of the cast, the crew, and the creator himself. Now, imagine you're 15, and thus interpreting all the hate as hate against you (which, unfortunately, some of it was). Now you'll understand Wil Wheaton's demeanor towards fans until his epiphany in the late '90s (as chronicled in his story The Saga of Spongebob Vega$pant$, or How I Learned to Stop Worrying and Love Star Trek).

Believe it or not, he hates Wesley, or rather what the writers had him do as Wesley. His reviews

of the Star Trek: The Next Generation episodes are sure to mention exactly how annoying Wesley is each time he appeared in the show. Unfortunately his review column was discontinued in early 2008 when TV Squad was bought by AOL, but he has collected his reviews of the first 13 episodes, expanded them and put them in a book called Memories of the Future: Volume 1 released in late 2009. Memories of the Future Volume 2, due to be released whenever, will cover the rest of the first season, most of which he didn't get the chance to review before the aforementioned discontinuing.

Since embracing his inner geek, he's written four compilations of memoirs, has a famous blog, and is embraced by geekdom as their avatar. It doesn't hurt that many of the mostly guest acting gigs he's scored these days are as geeks or voices of comic book heroes such as Aqualad and the second Blue Beetle. He was a caustic comic book collector on an episode of NUMB3RS that took place at a comic convention, a supremely creepy unsub (as if there's any other kind) on Criminal Minds and a Jerkass computer hacker on Leverage, a role which he has reprised several times.

He also did a hilarious take on Kent Brockman News as Richard Burns on GTA Radio, plays Fawkes on The Guild and was a frequent guest on the Dungeons & Dragons podcast alongside his fellow geek luminaries from Penny Arcade and PvP. He also plays Darkstar (imagine if Wesley was more obnoxious and villainous) in Ben 10: Alien Force, Ultimate Alien, and Omniverse. He also had a recurring role as Dr. Isaac Parrish, a Jerkass Ace, astronaut candidate, and Fargo's long time rival, on Eureka. He is also the host of TableTop and its RPG spin-off TitansGrave: The Ashes of Valkana, and plays a gleefully evil version of himself as a recurring character in The Big Bang Theory. In addition, Wil, like his The Guild co-star Felicia Day, has a voice role in Fallout: New Vegas, as the voice of the Robobrain enemy. In Code Name: S.T.E.A.M, he voice-acts Abraham Lincoln. He used to host The Wil Wheaton Project, a show which could be described as The Soup for sci-fi/fantasy and geek culture in general, but it was cancelled after a single season. In 2014, he was cast as recurring character Earl Harlan in Welcome to Night Vale.

Offscreen (well, and on, really), he's become pretty much the poster boy for One of Us.

At PAX 2007, he coined what has become known as Wheaton's Law: "Don't Be a Dick." The irony of this, considering most of his TV roles are Jerkass characters, has not been lost on the fandom. This has led to the corollary of Wheaton's Law, "Don't be a dick, but you can play one on TV."

(incidentally, Jeph Jacques drew his profile image)note at least he was, but he shut down his account in August 2018 and, these days, on Tumblr.