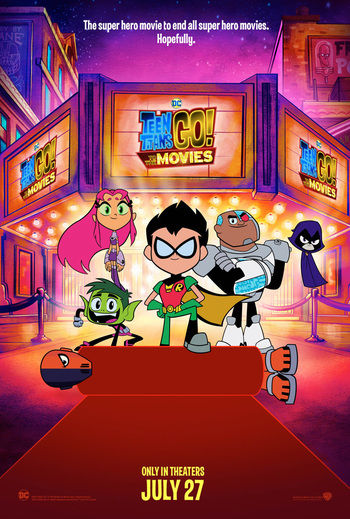 It's The Return of Slade! For real this time!
Advertisement:

Behold Titans! This is every superhero movie's dream: to have your own tropes page!

Teen Titans Go! To the Movies is an animated superhero comedy film based on the Teen Titans Go! animated series. The film was released on July 27, 2018 in the United States. The film is written by series developers Michael Jelenic (Batman: The Brave and the Bold) and Aaron Horvath (MAD), and directed by Horvath and series director Peter Rida Michail. It's the first film based on a Cartoon Network series to receive a wide theatrical release since The Powerpuff Girls Movie sixteen years prior.note If you want to count Adult Swim, it's technically the third movie based on a Cartoon Network series overall after that and Aqua Teen Hunger Force Colon Movie Film For Theaters, though that only saw a limited theatrical release.

The Teen Titans are unhappy that they aren't included alongside all the other superheroes who are starring in their own movies (even Alfred Pennyworth, the Batmobile and Batman's utility belt each getting their own solo outings), with Robin being the unhappiest of all. The reasoning behind this being the Titans' Designated Hero status: to the other heroes, they hardly ever do any actual heroics and instead use their powers to mess with people and, overall, are just jerks. Setting out to the Warner Bros. studio lot to remedy this situation, they discover from superhero filmmaker Jade Wilson (Kristen Bell) that they will never get the chance until they prove they can be actual heroes instead of a bunch of goofs: an opportunity that occurs when they encounter an arch-nemesis in the form of Slade (Will Arnett) and find themselves fighting to stop his plan for world conquest.

The film's theatrical run was preceded by "#TheLateBatsby", a DC Super Hero Girls short directed by Lauren Faust. The film's events take place during the show's fifth season, with the episode "Tower Renovation" wrapping up one loose end (sorta). The Stinger leads to Teen Titans Go! vs. Teen Titans.

The film has the following cast:

that there was a chance that the 2003 Teen Titans series could receive another season if this film were to be successful enough. However, the Direct to Video movie Teen Titans Go! vs. Teen Titans is the only project involving the original series thus far.

Teen Titans Go! To the Movies provides examples of:

"Kids! Ask your parents where babies come from!"
Feedback

Example of:
Hilarious in Hindsight