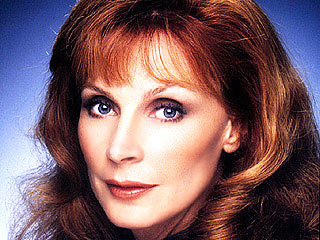 "I was pushed as a child performer, from very early in my life. At two-and-a-half, I was performing ballet recitals. I modeled clothes on a TV show when I was five."
Advertisement:

Cheryl Gates McFadden (born March 2, 1949 in Cuyahoga Falls, Ohio), is the American actress and choreographer most known for her role as Dr. Beverly Crusher on Star Trek: The Next Generation. She began her work as a choreographer for the Jim Henson Company, doing the choreography for The Dark Crystal, Labyrinth, and The Muppets Take Manhattan.

In 1987, she started acting as Beverly Crusher in Star Trek: The Next Generation. She left after the first season, but friend and co-star Patrick Stewart persuaded her to return for the third season, and she remained with the cast for the rest of the show's run and for all four subsequent movies. As an actress, she is credited as "Gates McFadden" and as a choreographer, as "Cheryl McFadden."

She is notable for her fiery red hair, startling blue eyes, and razor cheekbones.

As an actor, her films and TV series include:

As a choreographer, her films include: