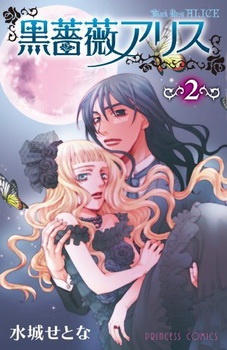 "Vampires are creatures that end their lives in the arms of the women they love".
Advertisement:

Vienna. 1906. The young tenor singer Dimitri miraculously escaped with his life after a severe accident. But soon after that, strange cases of group-suicides started to happen all around him. All comes to an explanation: after the incident in which he almost perished, he actually was turned into a vampire — and he's the cause of these group suicides. Not to mention the people who made him a vampire seem to think he's the successor of their leader, Lord Bradley. And then, it gets much worse... especially when this involves Agnieszka von Rosenfelt, the girl that Dimitri loves, and tragedy strikes.

Tokyo. 2008. Azusa Kikukawa is an uptight but beautiful music teacher, and young Kouya Ikushima (the son of her coworker) is the only student that doesn't think she's a buzzkill; he is very much in love with her, and tends to hang out with her outside of class in less formal situations and although she very much loves him too she has serious doubts and misgivings about their relationship. But right before she dumps him... they get involved in a horrible accident, and Kouya takes the worst part of it. Azusa doesn't want him to die, of course, and when the poor woman is despairing about it, she is given a Deal with the Devil: in exchange for Kouya's life, she'll become a vampire. Who is giving her said option? None other than Dimitri, who tells her that to save Kouya... she'll have to become Alice.

Kuro Bara Alice (Black Rose Alice or Alice of the Black Roses) is a Shoujo manga by Setona Mizushiro, dealing with the supernatural and romance. It is licensed in French from Kaze, and Viz Media brought it to North America in summer 2014 as Black Rose Alice.