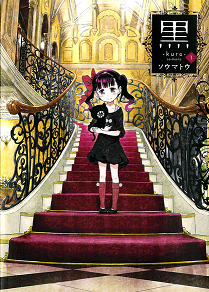 Kuro is a supernatural mystery horror manga by Somato (who would later go on to create Shadows House), which ran in Tonari no Young Jump from 2011 to 2016.
Advertisement:

The manga focuses on a young girl named Coco and her pet cat named Kuro, living together in a large mansion on the outskirts of town. The story details their day-to-day life and their interactions with friends from town. However darker things hide in the background, with monsters prowling in the forest, Coco's mysterious background and Kuro being no ordinary cat...