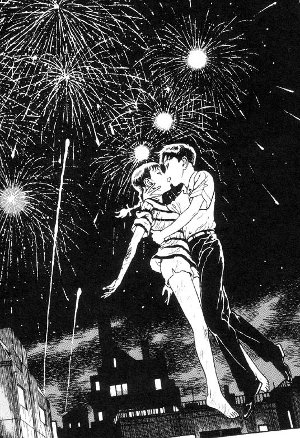 Eat your heart out, Bella!
Advertisement:

The Earthquake destroyed everything we know. A woman with a misshapen face rummages through piles of rubble and corpses, looking for valuables. She is caught by a lynch mob, who regard her as a bad omen and hang her with other criminals. Six feet under, she watches as the bodies of other victims bloat, rot and consumed by worms.

But the Earth rejects her: the woman, Rakuda, is a vampire.

The Laughing Vampire is a two-volume manga by Suehiro Maruo. Book One recounts how, years later, Rakuda finds a kindred spirit in a high-school student Konosuke Mori, and turns him into another vampire. Konosuke's transformation has repercussions on the lives of two of his classmates: Luna Miyawaki, a girl who, scared by a childhood incident, has deep loathing with everything sexual and compares sex with being bitten by a vampire, and Sotoo Henmi, an ordinary-looking loner who is secretly an arsonist with necrophiliac fantasies, and keeps a journal titled The Laughing Vampire.

Book Two moves away from the school setting and introduces new characters. Rakuda and her cohorts have attracted the attention of another group of vampires, who do not tolerate competition. Center to the story is Miko Takibana, a mysterious girl who ate insects and disappeared eight years ago.

The Laughing Vampire contains examples of: