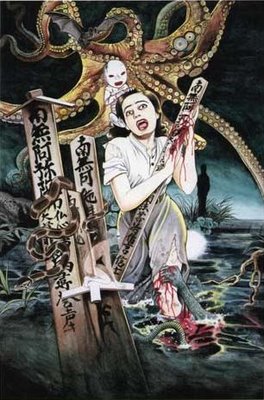 Never before or since has J-Horror been summed up so perfectly by a single image.

In the manga subgenre known as Ero-guro (Erotic-grotesque), Suehiro Maruo (born January 28, 1956) is renown for his beautifully-composed, exquisitely-crafted scenes influenced by Japanese Ukiyo-e prints on one hand, and the canon of Western fine art on the other.

Maruo's growing fame then allowed him to publish longer stories, of which Mr. Arashi's Amazing Freak Show has garnered him an international cult following.

His offical site is here

Tropes commonly found in the works of Suehiro Maruo: