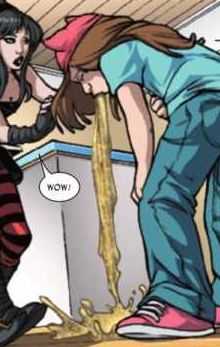 "Wow", indeed.
"For those of you listening at home, the young constable has just thrown up into his helmet. This is the longest continuous vomit seen on Broadway since John Barrymore puked over Laertes in the second act of Hamlet, in 1941."
— Narrator, Monty Python Live at City Center
Advertisement:

Since the Vomit Discretion Shot is so common, there's nothing better to show off how edgy you are than show the act directly. The grosser, dirtier, and more nauseating, the better.

Often shown from a low angle for added impact. A writer with particular attention to detail will notice that, having thrown up, the wave of the smell of the stuff is liable to make you... keep on at it.

See also Vomit Chain Reaction. The distant brother of this trope is Waterfall Puke, which usually applies to anime. Zombie Puke Attack, by its nature, will involve this. Often used for a Stress Vomit shot. Contrast Vomit Discretion Shot.

In a very graphic manner, no less!

Night in the Woods

In a very graphic manner, no less!

Night in the Woods