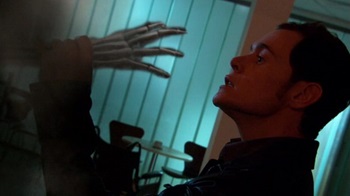 Owen fights the greatest murderer of them all... death itself.
"How long?! How long can you last here with only 12 victims? There's nothing here for you! Owen Harper's soul has left the building. There's nobody here but us dead men. What else have you got? What else can you do... to the dead?"
— Owen Harper as he yells at death incarnate
Advertisement:

Picking up an hour off from the previous episode's ending, we join Torchwood just about to begin Owen Harper's autopsy. Before guest-star Martha Jones can begin to perform it, Captain Jack asks everyone to stop what they're doing until he gets back. He visits a tarot-card girl, who tells Jack where to find what he's looking for. After a stop through a Weevil-infested church, Captain Jack brings back the goal of his mini-quest: the partner of the Risen Mitten. He's determined to being Owen back.

Jack decides that this glove is one he can use, although they don't know anything about its effects yet. What Could Possibly Go Wrong? Owen is ripped back to his own body with a scream, and Martha is just as horrified by this turn of events as she was when she first saw Jack resurrect. Ianto keeps track of the time 'til Owen permanently dies- two minutes at most. Having strong feelings for Owen, Toshiko can't take his suffering and her face is drenched in tears. Owen remembers he was shot and figures out he's in the morgue. He asks what happened to him and learns Jack brought him back to life... because Jack needed a password only he knew. After Owen bitches about being dead and getting brought back for a stupid reason, Jack wants everyone to say their goodbyes. But only Tosh can summon up something to say: that she loves him. And, rather unceremoniously, Owen goes back into the other realm that is de—

— wait, Owen's still responsive and sounding like his old, piss-and-moan self as though nothing happened? Why isn't he dead? Ianto's stopwatch has gone well past two minutes, and he's a mix of gobsmacked and excited by this development. Everyone stands around dumbfounded as Owen leaps back up and checks out his pulse and heartbeat, only to find out there isn't any. He submits to some of Martha's tests and, just as things begin to stabilise, suddenly blacks out. When he comes to again, Owen describes an incredible darkness — where a dark creature resides. And during these blackouts, it's trying to take over his body. But enough of worrying about that! There's a local pub to go to!

No, seriously, Owen decides to go to a bar and deal with things his own way. Until he realizes he can't taste the beer and can't get a hard-on. Jack follows Owen and tries to calm him down, but they get into a small brawl — and subsequently arrested. In their shared cell, Owen soon realizes that his own body is shutting down in all the ways that a corpse does. Including his digestive system. He gets rid of the several litres of alcohol in his stomach the hard way (by standing on his head and forcing himself to vomit), completely grossing out Jack (and the audience). Owen begins to utterly panic at the realization that he's got nothing left to live for. Jack, however, shares some Marcel Proust philosophy with Owen (having apparently dated Proust once) and at least gets him to calm down again.

On their way back from jail, Jack and Owen are chased relentlessly by Weevils... until the creature takes over Owen once more. The Weevils bow down and cower before Owen, and the creature speaks an incomprehensible phrase. After translation back at the Hub, it turns out that the phrase is "I shall roam the Earth and my hunger shall know no bounds"... which links this creature with some of the original interpretations of death itself at the start of the Middle Ages. And Death was only defeated the last time he showed up through "faith".

After a little bit of decision-making, the crew figure that this creature could be trying to pass through Owen into this world. With few options left, Owen decides to have himself embalmed. After all, if what's left of him is... theoretically... destroyed and turned into a regular corpse, then what's left for "Death" to come through? However, before the operation can be performed, the second Risen Mitten actually attacks the Torchwood crew, kills Jack and latches onto Martha Jones. Within a minute, the glove is torn back off Martha and destroyed... but Martha has been accelerated to the age of an old woman.

... and then a black fog that resembles death itself rips itself out of Owen's corpse and escapes from the Torchwood Hub.

Jack comes back to life in the car, outside a hospital, and rushes in to find the rest of the crew. They've taken Martha to the hospital for treatment, and begin to spread out and look for the creature. Luckily, it turns out that this Death has decided to move in and suck the life out of the people at this same hospital. Going with the legends uncovered earlier, Death needs only 13 souls in order to remain in this world and become a force of utter destruction.

Ianto: "I've searched for "I shall roam the Earth and my hunger shall know no bounds", but I keep getting redirected to Weight Watchers."

Within a few minutes, Death has all but one and is stalking his last victim: cancer patient Jamie Burton. Owen and Tosh appear just in time to drag the poor child away from Death for the moment. As Tosh unlocks the main doors of the hospital, Owen actually begins to give Jamie a speech about how having cancer isn't a death sentence... and realises at the same time how death was stopped last time is revealed. As it turns out... it wasn't faith, but Faith. A young girl who was brought back from the dead and accidentally brought Death with her, like with Owen, was the way to stop Death.

Owen snogs Tosh to sneakily steal her door-opening-gadget, and he locks her and Jamie out of the hospital — intent on taking on Death himself. Death shows up in a few seconds, intent on getting his last soul to live forever. Owen then utterly beats the unliving shit out of Death.

The threat over (though probably only temporarily, as Jack notes: how long can you beat back Death?), Martha returns to normal as well. She goes back to UNIT, and Owen decides to remain with Torchwood for as long as he possibly can — to make up for the twelve lives lost for the actions of him and Jack.