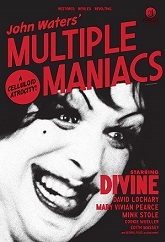 "You won't believe this one"
Advertisement:

Multiple Maniacs is a 1970 Horror-Crime-Comedy film directed by John Waters. It was his second feature film, after Mondo Trasho, and the last one shot in black and white. It tells the story of Lady Divine and Mr. David (Lochary), who have a traveling freak show called "The Cavalcade of Perversions," which is a front for robbing and killing spectators. Everything goes downhill from there.