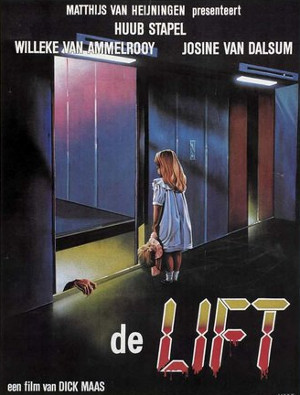 Do you know how many people get stuck in an elevator each year? [...] 250.000, just in our country note For reference: the Netherlands in 1983 had just over 14.3 million inhabitants, and this quoted statistic may or may not be true.

Inside an office building in Amsterdam, an elevator inexplicably begins to function independently following a lightning storm. The elevator then goes on a murdering spree, killing and injuring anyone who dares to go near it or use it. Among its victims are an elderly blind man who falls to his death when the elevator doors open to an empty shaft, the building night watchman who is decapitated by the elevator doors, and a janitor who is snared in the shaft in which his body drops through the elevator ceiling hatch.

In response to the mysterious malfunctions, technician Felix Adelaar (Stapel) is hired to examine the system in order to find the cause of the problem. Over the course of his investigation, he meets Mieke de Boer (van Ammelrooy), a journalist for De Nieuwe Revu, a tabloid magazine that Felix remarks he often finds in his friends' cat litter. As the inspection continues, Felix slowly becomes more and more obsessed with finding the cause of the anomalies, to the point that he stops interacting with his wife and son. Meanwhile, the body count rises, and the elevator intends to make Felix its next victim.