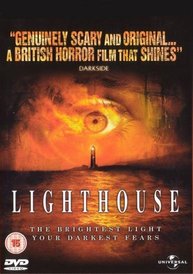 A British Slasher Movie from the year 1999.

A prison ship is transferring several convicts to a remote island prison. But then one psychopathic killer Leo Rook escapes and lands on a small island with a lighthouse in it. He then proceeds to kill the keepers and shut down the lighthouse. This causes the prison ship to crash, and the surviving staff and convicts end up on the island, where Rook is waiting for them.

Not to be confused with the 2019 film The Lighthouse.

Lighthouse will be showing you the way to: