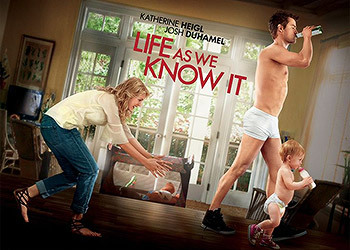 Am I Right?, target audience?
"If you love something, set it free. If it comes back, it's yours. If it doesn't come back, it was never yours to begin with. But if it just sits on your couch, eats your food, watches your TV, and uses your phone, and doesn't seem to realize or care that you set it free, you either married it or gave birth to it."
— A parodic twist on a well-known proverb
Advertisement:

A modern, less "offensive" variation of the Henpecked Husband, where in a married couple, the husband is quite a child-like, slobbish jerk, and the wife is like a parent to him except that she can quite easily provide him sex. Sometimes, the wife may talk about feeling like she really does have one more child than the number of children they have, and guess who the extra is? Ironically, her job of child care may be made easier by the husband being able to connect to their children more effectively.

Sometimes, though, the husband is perfectly angelic or a hard worker, or a mixture of the two, and the wife is simply motherly with no shallow motives, with him being most of all a Bumbling Dad with a penchant for causing wacky hijinks that she must resolve, this being part of a Women Are Wiser setup.

A rather awful Double Standard; the notion of a girlish wife in need of control and protection by a fatherly husband rarely appears and carries a lot of Unfortunate Implications (and similarly, the Henpecked Husband scenario is considered nowadays to be a big Take That! against the sole idea of a woman pulling the weight on the family— see the description above) but this one persists. There is offense given to both sides— men are told that they're useless and incompetent in the realm of family life and should really just let their wives take charge; women are told that they can't expect their husbands to act like grownups and should just resign themselves to having to carry their husband's weight responsibility-wise and being regarded as the boring killjoy of the family for it.

Not to be confused with Wife Husbandry, which is when an adult raises a child with the intent of eventually marrying them.