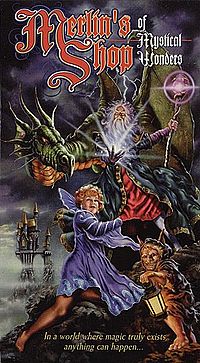 Your real problem's the monkey.
"It's called Merlin's Shop of Mystical Wonders - and it's a delightful Bambi romp through a flowery fairyland of happy, harmless, frou-frou family fun for the whole family of all ages. OR IS IT!?! Taste the rainbow of fruit pain!" (Evil Laugh)
—Pearl Forrester, from the Mystery Science Theater 3000 presentation
Advertisement:

Born of quite possibly one of the most moronic cases of Executive Meddling ever, Merlin's Shop of Mystical Wonders (1996) started out as a horror anthology directed by Kenneth J. Berton. Unfortunately, the movie studios didn't want any more horror as family films were all the rage then. As a result, a flimsy Framing Device about a child and his deeply unhinged grandfather (a poorly veiled Author Avatar played by a remarkably paunchy Ernest Borgnine) who tells his grandson stories during a power cut was attached (the program the grandson was watching before the power went out reminded Grandpa Borgnine "of a story [he] once wrote for TV"), a scene involving a séance turned into the Show Within a Show Cold Open, and umm...not a lot else changed.

The first story is about an uptight critic with an infertile wife who won't shut up about it who tries to criticize Merlin (who has apparently downgraded from serving the great King Arthur to running a joke shop in a strip mall in a bland Northern Californian town) for not being magical. So, Merlin gives him a spell book, to teach him a lesson. Naturally, this goes badly, and the man summons a demon, sets fire to the cat, almost impales himself and almost crushes himself. In the end, while trying to make himself younger, he conveniently turns into a baby, and his wife (now his mother) enters into possibly the Squickiest relationship ever to appear in a "family" film.

Then, Merlin's beloved wind-up monkey (AKA "rock and roll Martian") gets stolen (this monkey was seen on TV earlier, and is what inspired Grandpa Borgnine to tell this story), eventually making its way into the hands of a cute family at least a dozen years in the past, and shot on completely different film stock to the rest of the movie (the whole sequence was cut down from the same director's first, and only other feature, The Devils Gift). Being a smart guy, Merlin of course came up with a "homing spell" that would return the demon-possessed, death-curse-causing toy monkey to his possession on command, and because he's a really smart guy he then promptly forgot to actually use the homing spell on the monkey before it was stolen.

Best known now as the last episode (though technically it was episode three of season ten) of Mystery Science Theater 3000 broadcast during the series original run (it didn't air until after the Grand Finale, Danger: Diabolik, due to rights issues).

"Remember to believe in magic... Or I'll kill you."
—Crow T. Robot, as Merlin