Raise Him Right This Time 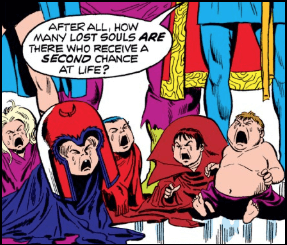 The Doctor: She can start again. Live her life from scratch. If we take her home, give her to a different family, tell them to bring her up properly, she might be all right.
Captain Jack Harkness: Or she might be worse.
The Doctor: That's her choice.
— Doctor Who, "Boom Town"
Advertisement:

Sometimes, a person's spirit is just too corrupted to redeem. Maybe he committed despicable acts, maybe he became one of The Heartless, maybe he just had extraordinarily bad luck. Regardless, there's simply no hope of redemption.

So, what do you do? Turn him into a baby!

Turning someone into an infant — mind, body and all — will essentially purify his/her spirit, and allow him to start over. Typically, the transformation is soon followed by one of the heroes (or at least a good person) adopting the newly made infant, and presumably raising him right this time.

This can be undermined if the person who adopts him raises him to be evil, anyway, or his Villainous Lineage wins out after all, or if the age-reversal fails to erase the villain's memories, or if he chooses it, perhaps after being told of his past. Good parenting or bad, questions of how this outcome is morally any different from imposing a Mind Wipe on someone are seldom addressed.

If an evil Immortality Seeker is looking for the Fountain of Youth, expect this trope to kick in even if nobody else tries to do it to him, but because of his own greed: chugging way too much of the youth-juice or whatever.

See also Fountain of Youth, which is usually the cause of this. Compare Turn Out Like His Father, Amnesiacs are Innocent, and Upbringing Makes the Hero. When this trope is used as a reward instead of a punishment (of sorts) it's And Your Reward Is Infancy.

An evil youth stealing sorcerer gets a bit too much of what he wanted...

An evil youth stealing sorcerer gets a bit too much of what he wanted...