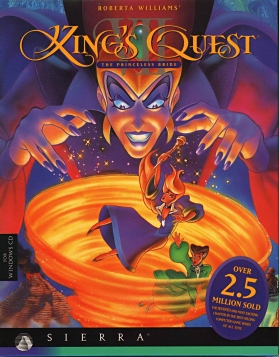 King's Quest VII: The Princeless Bride is the seventh game in the King's Quest series, and the first where you play as multiple protagonists. The graphic design was a departure from the series' earlier games and was meant to imitate Disney animation and garner a younger, female audience. It resulted in a lot of glitches.

Rosella, princess of Daventry, is upset because her mother, Valanice, wants her to get married, while she just wants to have adventures. She falls into a whirlpool and is kidnapped by a troll. She wakes up to discover she has transformed into a troll and is engaged to the King of Trolls. Valanice dives in after her daughter, but winds up in a desert in the land of Eldritch. Gameplay alternates between Rosella and Valanice, who want to escape the Troll Kingdom and find Rosella, respectively. Later, they discover Eldritch is about to be destroyed by an evil fairy named Malicia, and their goals shift from finding each other, to saving the world.

Notably for a Sierra King's Quest, this game cannot be made unwinnable — in trying to reach younger audiences, the creators decided to make the game much easier than previous installments. It's still a Sierra game, though — you die, and there are plenty of difficult puzzles, all the same.