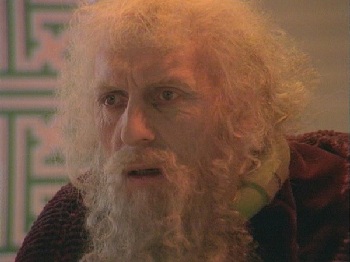 Even when rapidly aged 500 years, the Doctor still doesn't look a day over 760.
Brock: His scarf killed Stimson!
The Doctor: Arrest the scarf then.
Advertisement:

The one where Doctor Who goes full '80s.

Written by David Fisher. This four-episode serial first aired from August 30 to September 20, 1980.

The Doctor, now in burgundy, and Romana are in the mood for a holiday. After trying out the English seaside — shown during a 2-minute pan across a deserted beach — during the off-season, when the weather's bad and everything's shut, and it turns out that K-9 isn't waterproof, they head for the Leisure Hive, a famous resort on the planet Argolis in the 23rd century.

After Argolis was devastated in an interplanetary nuclear war, the survivors founded the Leisure Hive as a contribution to peace: a place where different races could mingle and get to know one another in laid-back surroundings. Not every Argolin, however, agrees with the Leisure Hive's peaceful mission statement. Also, Romana doesn't take long to notice that some of the Leisure Hive's technology is more advanced than it should be. And then the Doctor gets entangled in a murder investigation. Oh, and there's some kind of green scaly critter with great big claws lurking about, that's obviously up to no good...

Advertisement:
"The Leisure Hive", and by extension Season 18 as a whole, brought Doctor Who into the 1980s in full force, with new Show Runner John Nathan-Turner, a new look, and a new title sequence (complete with a new electronic synthesizer version of the theme tune and a bright neon-tube logo). Let's see what else is new to this era:

Looking back from post-2005, the serial's villains are also noteworthy. There's a plot twist where it turns out that the alien monsters, rather than being part of a hostile racial monolith, are a bunch of profit-motivated criminals regarded as renegades by their own society. Another plot twist is that several apparently-human characters are actually the villainous aliens in skin-tight disguises, even though undisguised (as represented by an actor in a bulky monster suit) they're clearly larger than any of the humans they impersonate. There's even a scene involving a horrified bystander and a discarded skin in a closet. Does anything remind you of this?