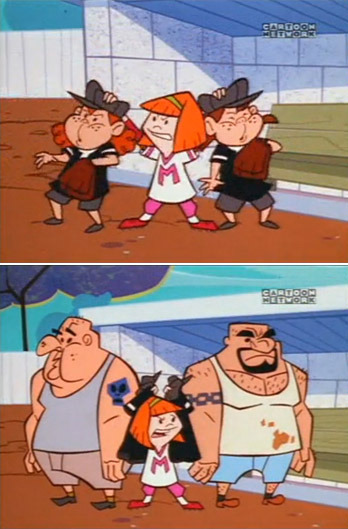 "Ow! Wait. How did you punch me? The hologram was so much taller than you. It defies logic."
— Heinz Doofenshrmitz, Phineas and Ferb
Advertisement:

Some clothing seems to expand and shrink to fit whoever is wearing it. However, sometimes, it's the exact opposite. The clothing stays exactly the same, but the person within changes to fit the costume.

Maybe this is done to keep someone's identity hidden from the viewer, or maybe just for a joke. But, whatever the reason may be, the people wearing these seem to be a lot more elastic than when they stop.

Usually a case of Full-Body Disguise, or occasionally Latex Perfection. Compare Bigger on the Inside, Older Alter Ego, Your Size May Vary and Totem Pole Trench. More exaggerated examples of Clark Kent Outfit tend to cross into this trope.