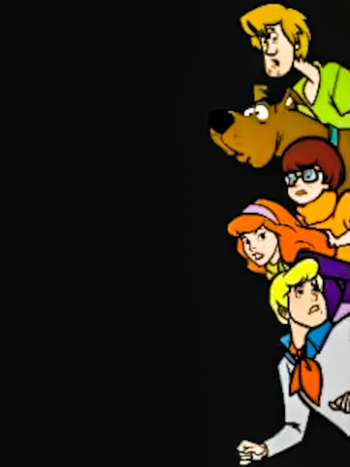 How did Shaggy get up there?
Advertisement:

When your characters need to see what's going on in that room over there, but they don't quite wanna risk coming all the way out into the open...

...when your characters all want to see rather than just sending one person to check so they can come back and tell the others, what do you do?

The Scooby Stack! We've all seen it in cartoons and comedies: one head pops out from behind a corner or doorframe. Another head pops out above the first. And one more above that. Given the heights involved, it may seem that the one on the bottom is on his or her hands and knees, and/or maybe the one(s) above him are on somebody's back.

Because Cartoon Physics works differently, you can even get a Scooby Stack of people popping out from behind a tree or other item too thin for the thinnest person to hide behind.

Though Scooby-Doo's Meddling Kids gets credit for Trope Namer, this trope may be Older than You Think.

Occasionally thwarted by someone surprising them by opening the door so they all fall on top of each other.

Not to be confused with the tall, stacked sandwiches enjoyed by Scooby and Shaggy.