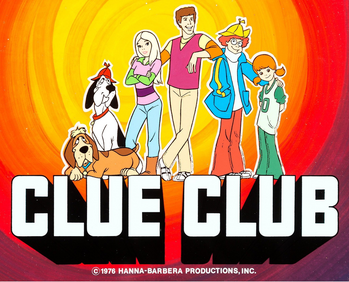 L - R: Wimper, Woofer, Pepper, Larry, D.D., and Dotty.
Clue Club was a Hanna-Barbera cartoon that was a copy in largest part of Scooby-Doo in that it entailed a group of four kids tapping into crimes and mysteries that the local law enforcement seemingly can't solve themselves.
Advertisement:

The group consists of Larry, the team leader; Pepper, one of two female members; D.D., Pepper's partner in clue searching, and Dotty, the youngest member of the group, Pepper's sister, and the team's troubleshooter. There are two dogs as well—Woofer (a bloodhound with a bravado complex) and Wimper (a basset who knows better). These two dogs can talk plain English to each other and other animals, just not to humans. Sheriff Bagley is the baffled flatfoot who sees the Clue Club as more nosy than helpful but he takes his cap off to them when the crime is solved.

Clue Club aired on CBS starting on August 14, 1976 (replacing Scooby-Doo, Where Are You!, which moved to ABC a month later). After a season, the episodes were chopped down to ten minutes and used as a feature on The Skatebirds, rebilled as Woofer & Wimper: Dog Detectives. At mid-season, The Robonic Stooges (another Skatebirds feature) was given its own time period (retitled The Three Robonic Stooges) and took Woofer & Wimper with them. In 1978, Clue Club returned to CBS, airing on Sunday mornings. In the mid-Eighties, reruns of the series would become a staple of the early USA Cartoon Express.

The complete series was released on DVD on August 11, 2015, via Warner Archive.