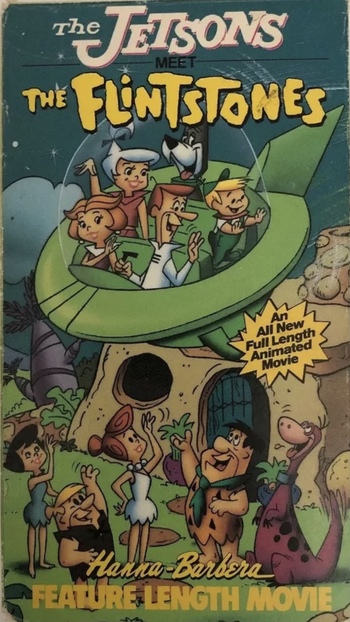 Time Travel. Is there anything it can't do?
Advertisement:

Often mislabeled as The Flintstones Meet the Jetsonsnote You can remember the correct title by remembering that "Meet the Flintstones" is the title of the Flintstones theme song., this was one of the films in the Hanna-Barbera Superstars 10 series of made-for-TV movies produced for syndication in the late 1980s. It's a Crossover between The Flintstones and The Jetsons.

In their respective times, Fred Flintstone and George Jetson are both experiencing troubles with their jobs - in Fred's case, he and Barney lose their job when they get caught at a poker game when they're supposed to be working the late shift, and George is being blamed by Mr. Spacely for the fact that Cogswell is stealing his company secrets (it's actually because Cogswell's new female computer, SARA, is seducing the secrets out of George's computer, RUDI). When Elroy builds a time machine, the Jetsons use it to escape their problems and end up in the Flintstones' time period. Fred attempts to use George's futuristic equipment to get his job back, but ultimately fails at that. Then, when Henry Orbit and Rosie construct a time machine retriever, they end up accidentally transporting the Flintstones and the Rubbles to the future instead. Back in the past, the Jetsons get rich thanks to George's anti-gravity flying belt, while Mr. Spacely makes Fred his new spokesman (only to have Cogswell steal this idea as well with Barney). Fred and Barney have another falling-out while the Jetsons soon find themselves missing their old life. Eventually, Rosie manages to find the Jetsons and bring them back, but the time machine breaks for good after that. Don't worry, the Flintstones and Rubbles do make it back to the past nevertheless.