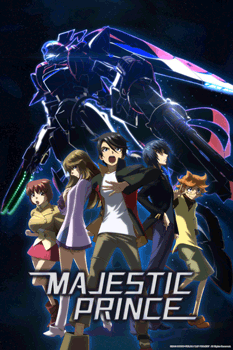 Majestic Prince is a sci-fi anime set 20 Minutes in the Future, featuring Humongous Mecha piloted by a Ragtag Bunch of Misfits fighting against a mysterious enemy from outer space.

In the latter half of the 21st century, humans begin to leave Earth and live in space. In order to adapt to the environment in space and deal with the hostile aliens in Jupiter, genetically engineered children called "Princes" are artificially raised and trained to be pilots of armed robots "AHSMB (Advanced High Standard Multipurpose Battle Device). This is a story about one of the teenage "Princes", Hitachi Izuru, who studies in an academic city Grandzehle, and his four companions as they begin their battle against the unknown enemy. That is, of course, provided they can start getting along with each other.

Originally a manga written by Rando Ayamine and illustrated by Hikaru Nijima, Majestic Prince has been adapted into a 24-episode season that began airing on the 4th of April 2013. A movie sequel, with the subtitle Kakusei no Idenshi, was released on November 4, 2016, after a rebroadcast that includes a 25th episode focusing on some of the new characters in the movie.

A character sheet is in development.