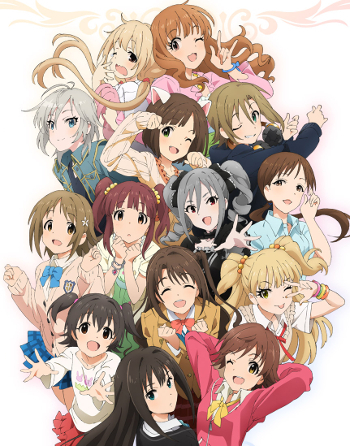 THE IDOLM@STER Cinderella Girls is the fourth anime series based on The Idolmaster video game franchise, produced by A-1 Pictures. Unlike the first three series, which were based on the main series games, this anime is based on the mobile game spinoff Cinderella Girls, and it acts as a sequel to the second TV series. While the game has hundreds of characters, the anime focuses on fourteen of them, with another ten or so idols as extras. The New Generations trio of Uzuki, Rin, and Mio is the primary focus, along with an unnamed producer working for 346 ("mi-shi-ro") Production.

A series of web shorts called NO MAKE* a pun on omake, meaning extra content, and "no make-up", or off-cameraaired immediately after each episode of the anime ended, adding extra interactions between the Idols of 346 Pro that otherwise would not have fit in the episode. In addition to NO MAKE shorts, a series of in-universe interviews named MAGIC HOUR was also available, with different hosts interviewing (mostly) non-Cinderella Project idols. Both of these bonuses can be found on the original Mobage game, under the "Friday Night Fever" page, which is accessible from the Database menu.