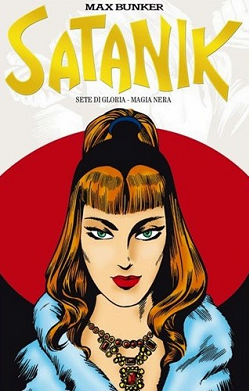 Satanik is a 1964 Italian comic belonging to the fumetto nero (black comic) genre, authored by Max Bunker and Magnus. One of the most successful endeavors of the genre, the comic is distinguished from others of its kind by the massive presence of supernatural and horror elements, which were absent in the grittier, more realistic examples like Diabolik and the several other comics that came after it. Running for 10 years, it ended in 1974 amidst many controversies, which surrounded this production more so than any other black comic of the period, yet it has enjoyed several reprints, and is still considered a classic by the aficionados.

Marnie Bannister's life, to put it bluntly, sucks. Despite being a brilliant biologist and chemist, having earned herself a Ph.D. at just 25 years of age, she is despised and ridiculed by pretty much everyone around her because of her poor origins and of an angioma that viciously scars her face. The third daughter of an alcoholic and of a closed-minded housewife, she still lives in the family, along with her beautiful sisters Dolly and Lydia, who continuously disrespect her because of her unsightly appearence. Pushed to the edge by the abuse, Marnie invents a serum by expanding on the research of the mad alchemist Masopust. After drinking the serum and going through a painful transformation, Marnie is turned into a beautiful red-haired seductress. Inebriated by her newfound appearence, and filled with grudge against the world, she decides to make the most of it, calling herself Satanik and starting a life of crime and lust for power that will leave countless bodies behind...