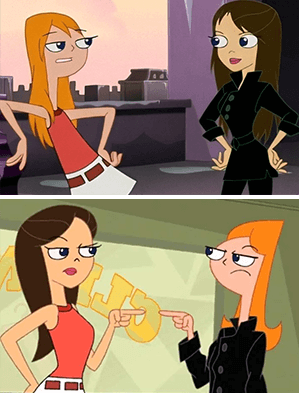 "I wear it better." "Says you."
Simply one or more characters putting on clothes belonging to someone else. It's often for fun, dressing up, or... something more kinky (for them and us). And, depending on the characters, this can be Fanservice.
Advertisement:

Heck, this can even happen by accident, just for Rule of Funny (getting wardrobes mixed up at a public laundromat is a particularly common way for this to happen). In more fantastical settings where Shapeshifting Excludes Clothing, two characters with very different physiques who know they're about to undergo a "Freaky Friday" Flip or a Physical Attribute Swap may preemptively do this to avoid Clothing Damage.

Can overlap with Cosplay Fan Art, Side-Story Bonus Art. The key is that the characters are wearing each others' outfit, or that a character is clearly wearing the clothes of another character in the same Canon.

A Super-Trope to Sexy Shirt Switch.

The Wiggles search for Dorothy in their bedrooms and end up in each other's shirts.

The Wiggles search for Dorothy in their bedrooms and end up in each other's shirts.