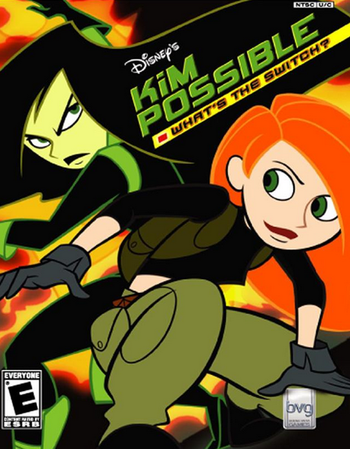 Disney's Kim Possible: What's the Switch? is a 2006 Platform Game for Playstation 2, based off the Disney cartoon Kim Possible.
Advertisement:

The plot starts with Kim and Ron going to Monkey Fist's castle to get the Mystical Monkey Idol before Drakken and Shego can. The two duos end up fighting. However, the Idol's power causes Ron and Drakken to switch bodies. Professor Dementor swiftly proceeds to pop up and steal the Idol himself. It's up to both Kim and Shego to get the Idol back and switch them back.

What's the Switch? is the first, and only, Kim Possible title released on home consoles. Like its predecessors it's a sidescroller, however this game is fully 3D. Kim is playable in all levels, Shego is playable in all-but-one, and Rufus is playable in three levels. The game also has multiplayer modes.