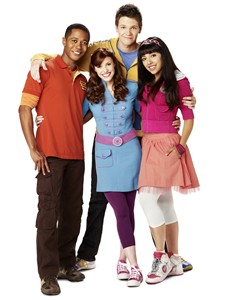 Clockwise from left:Shout, Twist, Kiki, and Marina.
Get on up, clap your hands, when you hear the Fresh Beat Band!
Advertisement:

The Fresh Beat Band (formerly called The JumpArounds) is a children's TV series that premiered on Nick Jr. on August 24, 2009 and ended on December 7, 2013. It focuses on Twist, Kiki, Shout and Marina - four best friends in a band who go to music school together and love to sing and dance. The series features a variety of pop songs performed by the Fresh Beats, and has grown very popular among kids and their parents. An album was released in 2012 as well as a live concert tour.