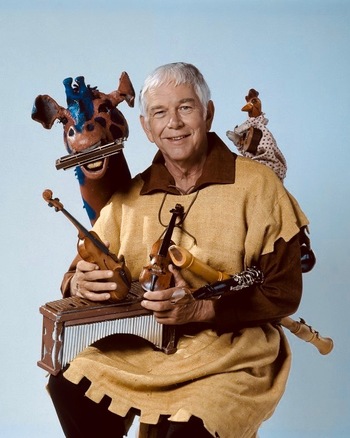 "Look up, waaaaay up."
— The Friendly Giant
Advertisement:

A long-running (1958–85) early morning children's show on CBC television. Originally started as a radio program in Madison, Wisconsin in 1953. It ran for 15 minutes every weekday at 10:15 am for nearly 30 years. Despite its American origins, and American-born host, the series is considered a Canadian cultural icon.

The show had three main characters: the Giant (played by Bob Homme), and two puppets, Rusty the rooster who lived in a sack on the giant's wall and Jerome the giraffe who came by the castle's window (both voiced and operated by Rod Coneybeare). The Giant told stories and played music for his visitors, the children watching the show at home, "curled up in an armchair".

The show's theme song (a gentle rendition of the traditional English folk tune "Early One Morning", played on harp and recorder) is very recognizable to most Canadians who grew up before 1985.