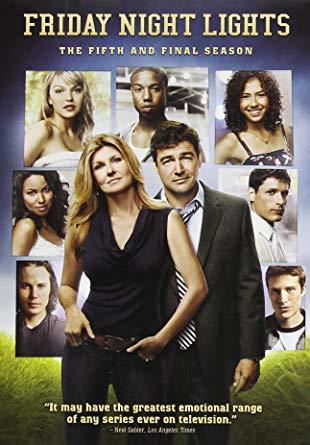 Kid: Mr. Street, do you think God loves football?
Jason: I think that everybody loves football.
— from the pilot episode
Advertisement:

In 1988, the Permian Panthers of Odessa, Texas, had a football season. And it was good. Then Buzz Bissinger wrote a book about it in 1990, and everyone could read about how it was good. Then in 2004, The Film of the Book Based on a True Story, Friday Night Lights, was brought to us by Peter Berg. And we could all see that it was good.

And in 2006, because the movie was far too short a window into what was good, Berg made Friday Night Lights: The Series. Where the previous were merely Based on a True Story, the series has essentially all new characters with familiar problems in a fictional Texas town called Dillon, for maximum storytelling flexibility.

Because of the show's large, constantly rotating ensemble, it's difficult to give a summary of the show that does it justice. It starts as the story of the Dillon Panthers, a very successful football team in a town with little else to talk about. At the center of the Panthers (and the show), is Coach Eric Taylor. Coach Taylor attempts to shepherd his players to success while raising a daughter and dealing with the demands of the school, the booster club, and the rest of the town. He wouldn't be anywhere without his wife Tami, the school's guidance counselor who later becomes the principal.

At the end of the show's third season, Coach Taylor is forced out of his job. He is hired as the football coach of the newly-reopened East Dillon High. Unlike the Panthers, the East Dillon Lions have the bare minimum of facilities, equipment, or a budget. Coach Taylor is faced with the challenge of building a football team from scratch. Unlike the championship-focused Panthers, the Lions are happy just to win single games.

The series has completed its broadcast on both Direct TV and network television and been released on DVD. Starting with the third season, it was subject to an unusual licensing agreement where each season would be exclusive to Direct TV for the fall, and then aired on NBC the following spring.

Now has a Character Sheet. Show it some love.