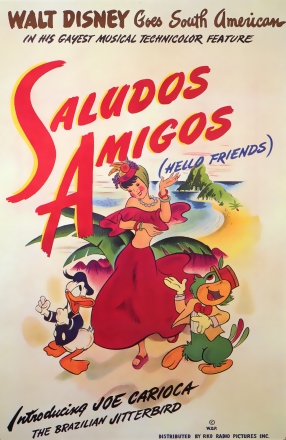 Yes, we get the irony of the tagline.
Saludos Amigos! A fond greeting to you!
A warm handshake or two, good friends always do.
Saludos Amigos! A new day's waiting to start.
You must feel it, wake up and greet it with a gay song in your heart!
Advertisement:

Released in 1942 in Brazil / 1943 in the States, Saludos Amigos (literally Greetings, Friends in Spanish; translated by Disney as Hello Friends) is the sixth movie in the Disney Animated Canon.

During World War II, Walt Disney was sent to South America to create a movie as a gesture of good will (read up on The Good Neighbor Policy

for more information on that). The plan was initially to simply release a series of shorts, but when worries arose that a specific short would only be popular in the country it was about, it was decided to package several together in a feature film. The end result is Saludos Amigos, a movie split apart into 4 distinct shorts:

The shorts are tied together with a live-action documentary, showing the Disney artists' trip around South America, showing their experiences and drawings, and the inspiration for the shorts that follow. The movie is also the shortest to be produced by Disney, running at only 42 minutes, live-action segments included, and just barely qualifying as a feature film (which have to be longer than 40 minutes).

During the trip, Disney and his artists apparently came up with about 12 unused ideas for shorts about Latin America. One of them would later become Blame it on the Samba, a short used for the movie Melody Time.

Walt later created a follow-up film, The Three Caballeros. A documentary about the original trip, Walt and El Grupo was released in 2009.

Not to be confused with the PBS learning show from 1983 that people assume have this title.