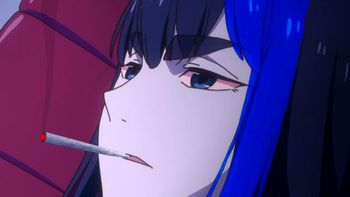 Satsuki Matoi, the hero of our story, doing her favorite recreational activity until things go awry halfway through.
Advertisement:

is a Kill la Kill fanfic written by GasmaskAvenger

And it goes like this: Satsuki Matoi is a regular Japanese girl who discovers there's more to her than she thought after a chance discovery of a very special school uniform and a blue, scissor looking blade. Along with her classical music loving BFF Nonon Jakuzure, she sets out in an adventure that will ultimately result in saving the world.

As of 09/10/2015, an official omake side fic set during the events of Chapter 9 entitled "Remedies for Loneliness"

was released by 99-Cells and is recommended reading for fans of the fic craving for more adventures set during the earlier days of the fic. Later, by the same author as the omake, we have a prequel fic called Days Zero