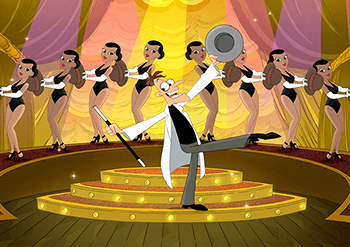 "Oh, they're union. They travel."
"What do you go for,
Go see a show for?
Tell the truth, you go to see those beautiful dames."
— Dames, title song
Advertisement:

Often, one Ms. Fanservice is not enough. So, a show may fill itself to the brim with sexy young ladies in Stripperiffic costumes. Having a chorus of showgirls dance with plenty of wiggles and high kicks helps keep the men in the audience entertained. A kick line also adds some flair to the Last Chorus Slow-Down.

This was fairly common in earlier musicals, back in the days when the target audience member was the proverbial "tired businessman" (nowdays, he would go to a strip club). Thus the horror whenever someone in Jeeves and Wooster set their sights on "a chorus girl".

A Sister Trope to Lovely Assistant, and the most essential component of the Busby Berkeley Number. Always Female, unless maybe a Drag Queen shows up.

Compare the Jiggle Show (the women are actually the stars of the show, rather than decoration).