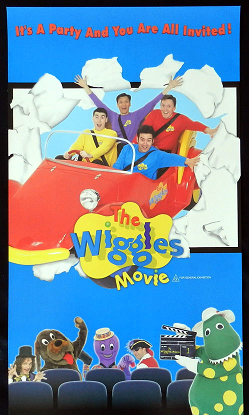 The Wiggles Movie is an Australian children's musical movie made in 1997, and starring, of course, The Wiggles. The film was distributed by 20th Century Fox in Australia and Hit Entertainment in the USA and UK, where it was released direct-to-video and known as 'The Wiggles' Magical Adventure: A Wiggly Movie'.

In the movie, Greg, Murray, Anthony and Jeff embark on a journey to find Dorothy the Dinosaur after she takes chase to an amateur magician named Wally the Great, who steals Greg's magic wand in an attempt to become a better magician. Meanwhile, Dorothy feels sad, as she thinks that The Wiggles (and everyone else) have forgotten her birthday, but in fact they're planning a surprise party for her at a circus tent that same night. The Wiggles and Dorothy also run into Henry the Octopus, Captain Feathersword and Wags the Dog on their separate journeys, as Dorothy becomes increasingly worried about whether anyone will remember her birthday at all.