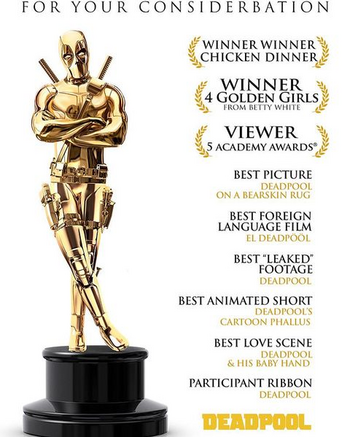 What? No Academy Awards for Deadpool? How dare they?note Poster tweeted by Ryan Reynolds himself, because the film had no nominations for the awards
"Who can forget movies like Raging Bull, E.T., and Citizen Kane? The Oscars, that's who! They all lost!"
— Jay Sherman, The Critic
Advertisement:

The Oscars. The Emmys. The Grammys. The Tonys. The Golden Globes. The MVP. The Nobel Prize (Borges was robbed, I tells ya! Robbed!).

These awards represent the supposed apex of recognition for the creative, intellectual, and athletic arts, the validation of a person's years of hard work and creativity... a work's mark of superiority whatever the medium... recognition by both the establishment and your peers.

So why is it that so many artists and works, some even considered among the best of all time, have gone award-less?

An Award Snub is when a work or person is denied the acclaim of a popular award that it seems to deserve, through action malicious, unintentional, overly reactionary, out-of-touch, or anti-populist on the part of award voters. The reaction to the folks at home is the same: "That didn't win? And that did?!" It's a real life case of Dude, Where's My Reward?.

Of course, it could also be for entirely innocent reasons. If two or more great works come up for the award that year, someone's going to have to be disappointed. There Can Be Only One, after all. The 1940 Oscars (for the films of 1939) are an extreme case of this. Out of 10 nominated films, 8 were iconic, still critically acclaimed classics.note the winner was Gone with the Wind, the others are The Wizard of Oz, Stagecoach, Mr. Smith Goes to Washington, Wuthering Heights, Goodbye, Mr. Chips, Love Affair and Of Mice and Men

If an individual has gone for long enough with continued snubs, expect an award to be given (almost out of pity) for a recent perhaps-inferior work or at the very least, a life-time achievement award. For more information on that phenomenon, please see Consolation Award.

In the worst case scenario the unrewarded artist dies and (unless he/she completed something before their death that's deemed eligible and worthy) the voters never have another chance to make things up to her/him; posthumous honorary awards just don't exist. This is an unfortunate overlap with Posthumous Popularity Potential.

See also Vindicated by History, when the work or artist gets their honor long after the snub, as well as Public Medium Ignorance, which works that are subjected to this are prime targets for award snubbing. For when an actor is nominated for the wrong category, see Award Category Fraud.

For the hipster equivalent, see It's Not Supposed to Win Oscars.

Heated debates on if a work was actually snubbed have often occurred and can also degenerate into Complaining About Shows That Won as well as Take Thats to shows that lost, so because of that we won't be listing such examples here. If you really want some ideas, check out these off-site articles about The Oscars

, which were created at least in part as a way of addressing/averting this.