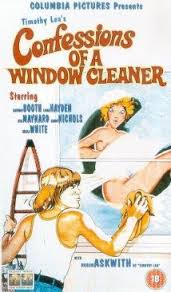 "Why is it that the heart sinks, the knees sag and stark horror grips the soul at those three words: British Sex Comedy?"
— Tim Healey, The World's Worst Movies
Advertisement:

Most famous was the "Confessions of a..." Series, four films entitled Confessions... of a Window Cleaner, of a Driving Instructor, of a Pop Performer and from a Holiday Camp, all of which followed the misadventures of "lovable" loser Timmy Lea (to quote the theme tune from the first episode "You're really not a loser, you just find it hard to win") as he bungles his way through a series of jobs set up for him by his brother-in-law, Sid Noggett, who happened to be played by the future father-in-law of former British Prime Minister Tony Blair. At every turn, Sid and Timmy attempt to have sex with every young woman they meet, often successfully. Subplots include Sid's stormy marriage and Timmy's Dad's habit of stealing things from the lost property office where he works.

Other similar films were made at about the same time, including the derivative "Adventures" series, one episode of which, Adventures of a Taxi Driver is said to have out-performed Martin Scorsese's Taxi Driver at the British box office; if true, this says a horrible thing about British culture in the '70s note The page image, Confessions of a Window Cleaner notoriously knocked Disney classic The Aristocats off the number one spot of the most popular film of 1974. Established comedy series, such as Carry On, also converged with this type of film during The '70s.

All the films of this type were cheap, cheerful and cheesy. They also showed considerably more flesh and considerably less morality than modern sex comedies. For example, remember how, at the end of American Pie 2, our hero turns down the beautiful foreign student who has already got her tits out and runs off after the band geek whom he has just realized he really loves? Timmy Lea would have shagged the foreign girl, then said, "Ta very much, love. Cheerio!" and then ran off after the band geek. And the shag would have been on camera.

A notable TV example of this genre is The Benny Hill Show, a long-running Britcom that ran for 20 seriesnote The British telly equivalent of a show's TV season; for example, Series 1 would be the British equivalent of Season 1, etc. from 1969 to 1989, which is notable for two things: Benny Hill's slapstick antics, which would usually result in a woman hitting him even when contact was accidental, and getting Chased Off into the Sunset with such a closing sequence involving "Yakety Sax", the wacky, fast-paced closing theme played by Boots Randolph on the saxophone.

Laden with tropes, including: