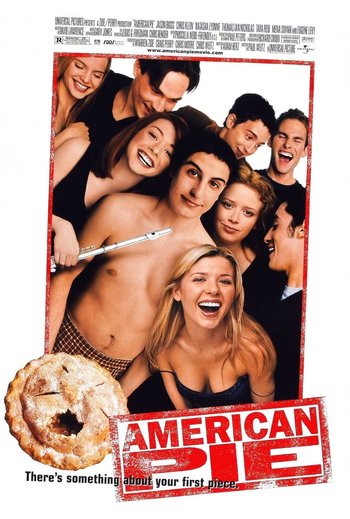 "Oh, and this one time, at band camp..."
Advertisement:

The film concentrates on five boys at East Great Falls High — Jim (Biggs), Kevin (Nicholas), Oz (Klein), Finch (Thomas), and Stifler (Scott) — who make a pact to lose their virginity before their high school graduation (save for Stifler, who has already done so). The title of the film has various meanings, referring on a surface level to a scene in the film in which Jim is caught masturbating with a pie after previously being told that a vagina feels "like warm apple pie", and also to the idea proposed by Adam Herz that the quest to lose one's virginity in high school is as "American as apple pie" itself.

The Weitz brothers' first film, American Pie was a huge box-office hit and spawned three direct sequels, beginning with American Pie 2 (2001) and then American Wedding (2003). The fourth installment, American Reunion (2012), featured the entire primary cast of the first two films reprising their roles for the first time in over a decade.