All spoilers for The Nutty Professor (1996) are unmarked. You Have Been Warned. 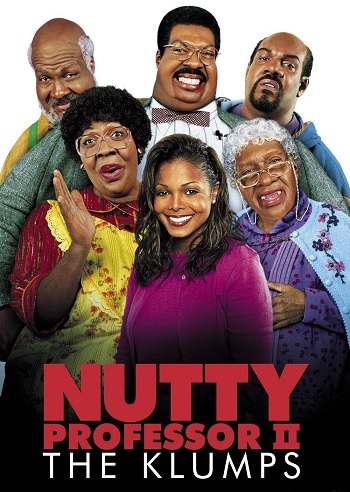 The Klumps are back!
Advertisement:

Nutty Professor II: The Klumps is the 2000 sequel to The Nutty Professor, directed by Peter Segal, with the screenplay by Barry W. Blaustein, David Sheffield, Paul Weitz and Chris Weitz, and the story by Blaustein, Sheffield and Steve Oedekirk. It was released on July 28, 2000. Given that a third film never materialized, and the plot to this one ties all loose ends, it serves as a finale to the film series.

Like the first movie, it stars Eddie Murphy in multiple roles, and this time the Klump family is more front and center, with a subplot centered on the parents, and the brother and grandmother providing comic relief.

Sherman Klump (Murphy) and fiancée Denise Gaines (Janet Jackson) work on the DNA restructuring formula, this time leading to the discovery of a potential Fountain of Youth. But Sherman is still struggling with his alter ego Buddy Love (Murphy), whose personality sometimes take over. This leads him to try a dangerous experiment to remove Buddy permanently, using Denise's methodology to get rid of the gene through which Buddy manifests. Because he does not dispose correctly of the extracted DNA, it accidentally get mixed with a hair from a basset hound test subject, and it causes Buddy Love to grow into a separate entity. Lots of hijinks ensue.