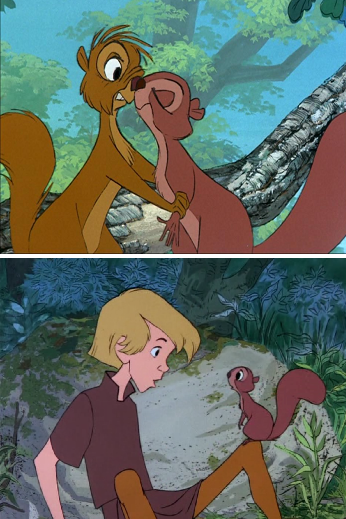 When a character shapeshifts into an animal, voluntarily or otherwise, or just puts on a very convincing Animal Disguise, there is a high likelihood that an actual animal will try to hit on them.

The character may regard their newfound animal admirers as anything from a Dogged Nice Creature to an Abhorrent Admirer, depending on their perceptions of the species in question; unlike Black Comedy Rape, the animal intends no real offense with their advances — the character probably just Smells Sexy, whether they realize it or not.

While it can be (and often is) Played for Laughs, it can also be played for all the Fanservice it is worth, thanks in no small part to Rule 34: If the character starts viewing the animal as attractive in return, they might end up hitting on the animal themselves. The consequences of whether or not they can adequately restrain their amorous animal impulses can provide clues to the author's position on the Sliding Scale of Idealism vs. Cynicism: it could, for example, trap the character in animal form forever.