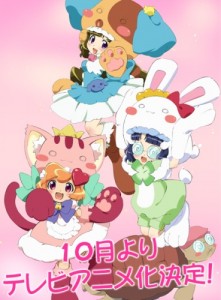 Riko and Rimu Mikogami are two twin daughters of a water flea-researching father and a pet caretaking mother. One day, while searching a cat that ran away, they get into the attic of their house and find 5 mysterious compact-looking machines named "Kirumins". When they do what the Kirumin machines told them, they transform into a catgirl and a bunny-girl (nope, not the sexy type). Later on, they are joined by Nagisa, their older sister that can turn into a dog girl, and Ken and Tamao, two of their friends in school, but while Ken can transform into a mouse boy, Tamao's Kirumin doesn't work, but his kirumin looks like a bird. Regardless, he makes up for it with his intelligence.

Together they form a detective club, in which they solve mysteries mostly revolving around animals, and thanks to their Kirumins, they can turn into animals and use their abilities to solve any case, as well as understanding the feelings of the other animals.

Meanwhile, a mysterious organization leaded by Misa Hatori and co-leaded by her daughter Kanon and her assistant Pars, is trying to attract other humans and bite them to become animalians; humans that turn into animals, as part of their "World Heritage Project", but what are their true intentions?