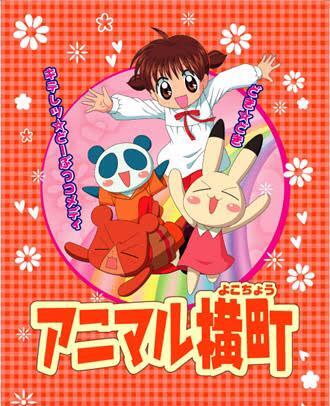 Animal Yokocho (Ani-Yoko for short lit. "Animal Alley") is a Japanese Gag Series shoujo manga, written and illustrated by Ryō Maekawa. The manga began serialization in the shoujo magazine Ribon in February 2000, and is still ongoing.

It is about a little girl named Ami Matsuzaki who has a secret doorway on the floor of her bedroom that leads to another world that is called "Animal-Yokocho/Ani-Yoko". It is inhabited by stuffed-animal like creatures (the main trio, Kenta; a bear, Iyo; a rabbit, and Issa; a panda) and who knows what. We are lead to believe so since the world of Ani-Yoko is never seen, save for a few shots shown in the anime when one of the characters have their flashback moments.

The series' notable humor often ranges up to Breaking the Fourth Wall and/or leaning on it sometimes. Much of the comedy also involved the Trio using and sometimes misinterpreting elements of popular Japanese culture, such as television quiz shows.