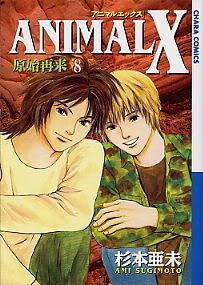 Animal X is a lengthy series of yaoi manga by mangaka Sugimoto Ami.

Yuuji Ayukawa is a meek 27-year-old man who has never been in control of his own life. From his fiancée lecturing him about his shyness and sensitivity to his position as glorified guinea pig at Endou Chemical, Yuuji is the quintessential Extreme Doormat.

One evening, he comes home to find that he has left a window in his room open. A wild young man who has just escaped government custody leaps out from beneath his bed and threatens to kill him. Yuuji's roommate, another in the long line of bullies Yuuji apologetically endures, bursts in...and is promptly decapitated by a fifteen-foot-tall T-rex. It turns out that Minato is a 17-year-old dinosauroid, part of a species that has long lived apart but parallel with humans, and he is capable of transforming into a reptilian killing machine under stress. Something has attracted him to Yuuji's room: Yuuji "smells like kin" and Minato is immediately overcome by an overwhelming desire to mate. From there, the story becomes the tale of various Ancient Conspiracies, corrupt researchers and executives, and Yuuji and Minato's evolving relationship.

And then Yuuji gets pregnant.

It is probably one of the least sensational uses of Gender Bending and Mpreg since The Left Hand of Darkness.

Currently has three series, Aragami no Ichizoku , Daichi no Okite, and Genshi Sairai, the last of which is incomplete and on hiatus.

Not to be confused with the Discovery Channel series about cryptozoological animals.