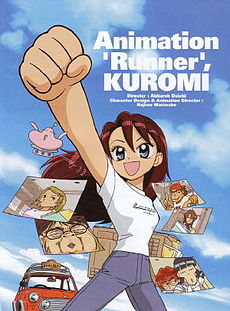 Mikiko Oguro's first day at Studio Petit does not appear to be going well. The producer who hired her uses Alternate Character Reading to hang the nickname "Kuromi" on her, appoints her Production Desk Manager for Time Journey 2 and promptly keels over from a bleeding ulcer, effectively throwing her in at the deep end to sink or swim on her own with only a week to go before the key animation is due! Can a neophyte like Mikiko (or Kuromi, as everyone at the studio insists on calling her) possibly learn the ropes fast enough to prevent the production from failing behind schedule? Well, she's certainly determined to try, just as soon as she can figure out thing one: namely, where the heck is everybody?

Animation Runner Kuromi (2001) is 40 minute OVA from Yumeta that serves as both an introduction to and Affectionate Parody of the classic piecework anime production process as it was practiced in Japan at the turn of the millenium, with poor Kuromi rushing around at a breakneck pace desperately trying to wrangle the "cuts" (animation "keys") out of an oddball crew of variously neurotic artists who mostly work at home. Somehow she has to figure out the right psychological levers to pry the key drawings out of artists ranging from a reclusive otaku to a disgruntled housewife, all while learning just where producers, directors, key animators, inbetweeners and show runners like herself fit into the anime production process.

In Animation Runner Kuromi 2 (2004) Kuromi is now production desk manager for three series at once and is forced to choose between quality and schedule. She has to cut corners somewhere to get her shows in on deadline, but how can she do it without ruining the final product?